RollingStone.com /// Best New Orleans Jam: Foundation of Funk Billed as a set to honor the 50th anniversary of New 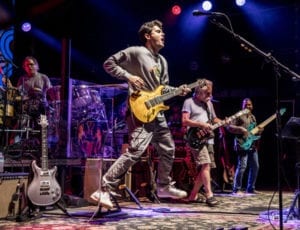 Jambands.com /// “The world is full of surprises and today is no different,” Zigaboo Modeliste told the crowd before welcoming

Foundation of Funk Celebrates 50 Years of The Meters

Jambands.com /// This year, legendary New Orleans funk godfathers The Meters are celebrating their 50th anniversary, and to honor the

LiveForLiveMusic.com /// I have had the honor of performing at countless music festivals throughout the years with my bands, Lettuce and Break Science,

Foundation of Funk is a live performance project conceived by the legendary Meters’ drummer and vocalist, Zigaboo Modeliste. In 2015, Modeliste recruited bassist George Porter Jr. to join him – the other anchor of The Meters’ rhythm section, along with select players who have carried on the funk and jam tradition. The group pays homage to The Meters’ catalog in a new and unique collaborative format, creating a unique experience from show to show.

ABOUT GEORGE PORTER JR
Few bass players in the history of modern New Orleans music are as storied as George Porter, Jr. During a career spanning more than five decades, he has made a deep impression through his work with The Meters and has notched sessions work with artists as diverse as Paul McCartney, Jimmy Buffett, David Byrne, Patti LaBelle, Robbie Robertson, Tori Amos and Taj Mahal. Porter also leads the Runnin’ Pardners, a touring New Orleans band — well respected in the jam band and festival scenes.