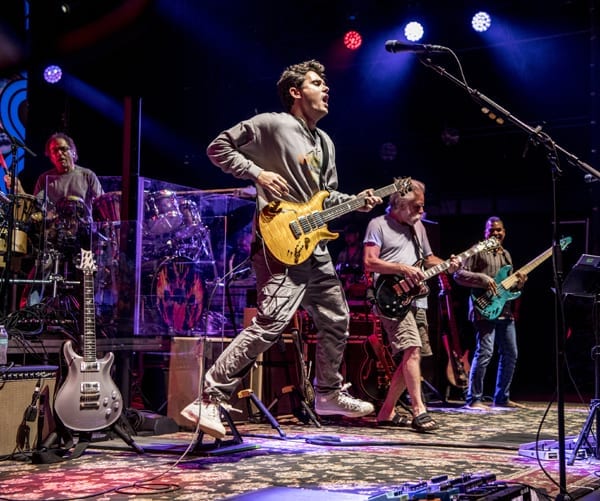 “The world is full of surprises and today is no different,” Zigaboo Modeliste told the crowd before welcoming John Mayer, Bob Weir, Bill Kreutzmann and Mickey Hart of Dead & Company to join Foundation of Funk this Saturday on the main stage.

It was truly one of those LOCKN’ moments: a cross-generational meeting of The Meters, the Grateful Dead and the current iterations of both legendary bands. The collaboration kicked off with a riff on “Hey Pocky Way,” which transitioned into a delightful “Iko Iko” and then an extended rhythm jam. For the music nerds in the audience, it was a cosmic occurrence. The original Meters rhythm section (bassist George Porter Jr. and drummer Zigaboo Modeliste) were playing in perfect time with Mickey Hart and Bill Kreutzmann a.k.a. the Rhythm Devils. The two bands finished up their 50-year celebration of The Meters with “Fire On The Bayou” and “Ain’t No Use,” and the younger members of each respective band held their own on the crowded stage, including Ivan Neville, who shared lead vocals with Cyril Neville on the band’s final tune.

“This particular lineup is really fun,” George Porter Jr. said of his younger Foundation of Funk bandmates before their set. “It’s like we’re playing with our kids. They know the music better than we do.”

Much like every other year at LOCKN’, a passion for music was a constant thread throughout the day. Local ROCKN’ to LOCKN’ winners Disco Risque opened the main stage Saturday afternoon, waking up many campers who spent the previous night grooving in Garcia’s Forest. Disco Risque were followed by fellow Virginia band People’s Blues of Richmond, previous ROCKN’ to LOCKN’ winners themselves who bookended their set with a rock-and-roll take on the National Anthem.

After fans enjoyed the dovetailing soul sounds of Southern Avenue and The Suffers, Big Something lit up the main stage with their electro infused jams. A mid-set combo of their own “Wildfire” and The Who’s “The Seeker” was a definite highlight, as were sit-ins by DJ Logic and members of Spritual Rez.

Around 4:00 p.m., the main stage revolved once again to reveal the twangy offerings of Keller & The Keels. As Williams is wont to do, he dotted the trio’s set with a range of covers, including a version of “Pepper” by Butthole Surfers as well as takes on The Eagles’ “Seven Bridges Road,” Marcy Playground’s “Sex and Candy” and Pink Floyd’s “Another Brick in the Wall.”

During Keller and the Keels’ final songs the crowd began to thicken with funk fans excited for Pigeons Playing Ping Pong’s first-ever set on the LOCKN main stage. The Baltimore-based quartet made a splash on the Relix stage at LOCKN’ 2017, and returned this year to even more fanfare. Earlier on Saturday, the band hosted a meet-and-greet at the Relix booth, and met over 100 fans. “Virginia is for Flockers,” frontman Greg Ormont said on the tail-end of their set, referring to their cult following.

Next up was Foundation of Funk, and even before they invited their friends from Dead & Company onstage, George Porter Jr., Zigaboo Modeliste, Cyril Neville, Ivan Neville, Tony Hall and Ian Neville were primed for a memorable performance. The collective opened with The Meters’ “The Same Old Thing,” and touched on fan favorites like “Just Kissed My Baby” and “Cissy Strut,” before the aforementioned Dead & Co. crossover.

As the sun began to set, the sky above Infinity Downs grew darker and Tedeschi Trucks Band took the stage. His performance with TTB marked Derek Trucks’ second appearance of the weekend. In one of the most talked about moments of Friday night, the slide guitarist added some extra guitar licks on Led Zeppelin’s “Whole Lotta Love” with Umphrey’s McGee and Jason Bonham. Keeping with the theme of honoring legends, the band opened with a tribute to the late, great Aretha Franklin, with Susan Tedeschi showing off her vocal chops on Franklin’s “I Never Loved a Man (The Way I Love You).” Over their two hour set, TTB served up originals like “Made Up Mind” and “Bound For Glory” featuring special guest Ian Neville. The band also teased their roots with the Allman Brothers by closing with the always-aggressive “Whipping Post” which emerged from “The Storm.”

And while Dead & Company hit the stage later than expected, the headliner punctuated their first set with a slew of uptempo tunes, including “Hell In A Bucket,” “Scarlet Begonias,” and “Brown Eyed Women.” A rocking “Deal” closed the first half, with keyboardist Jeff Chimenti and John Mayer offering back-to-back solos. Set two, on the other hand, was a little headier, opening with the classic pairing of “Help On The Way” > “Slipknot!” as well as a “Fire On The Mountain” with bassist Oteil Burbridge on vocals. By the time the band arrived at a peaking “Franklin’s Tower,” the crowd was ecstatic, with almost everyone raising their hands in the air.

Dead & Company eventually closed the main stage with “The Weight” and “One More Saturday Night,” but that didn’t mean the night was over for Burbridge, Mayer or Weir. With Lettuce celebrating Jerry Garcia Band on the Relix Stage, it was just matter of time before a member of the extended Grateful Dead family joined the party. Burbridge was first, singing on the Peter Tosh original and Jerry Garcia favorite “Stop That Train.” Lettuce also took the time to wish the Dead & Co. bassist a belated “happy birthday” (Burbridge turned 54 on August 24). Mayer followed Burbridge, hopping onstage and applying his signature blues-rock style to “After Midnight.” Shortly afterwards, Weir, Mayer, Lettuce and previously-announced special guest Eric Krasno were all diving into a “Sugaree” jam. Smile-inducing, heavy-grooving versions of “Tangled Up In Blue” and “How Sweet It Is (To Be Loved By You)” were among the songs to follow. Indeed, as Krasno and Mayer traded solos on an emotional “Sugaree” and Weir sang Garcia and Hunter’s words, the crowd was lost in the music, singing along to every lyric.