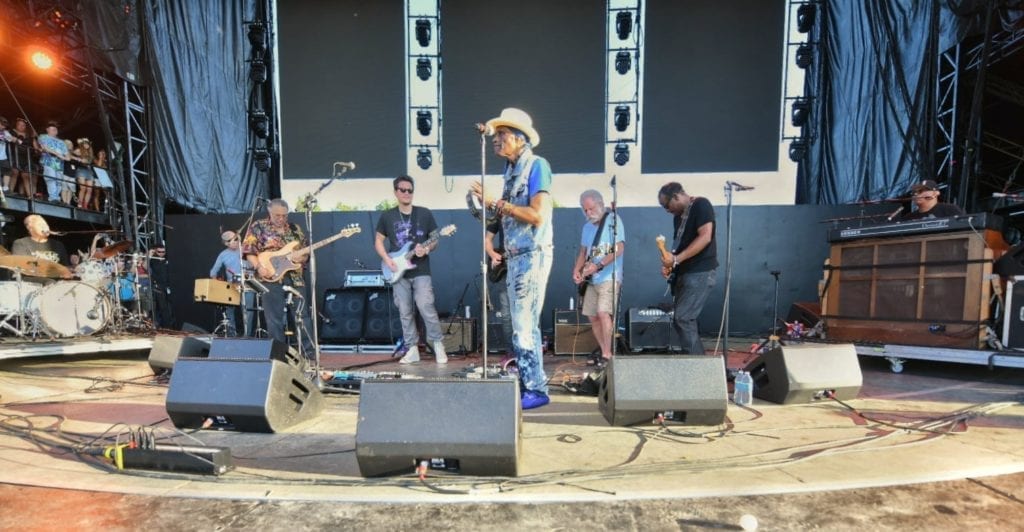 On Saturday, LOCKN’ Festival hosted a truly next-level lineup of musicians, with the entire day jam-packed with high-octane performances featuring guest sit-ins and more. Dead & Company headed the festivities on the main stage, though many of its band members kept themselves busy through the evening, later sitting in with Lettuce‘s already-historic late-night tribute to Jerry Garcia Band. However, ahead of Tedeschi Trucks Band‘s set, multiple members of the group—Bob Weir, John Mayer, Mickey Hart, and Bill Kreutzmann—warmed up before their show with a special sit-in during Foundation Of Funk‘s set.

For those unfamiliar, Foundation of Funk is led by the original rhythm section of The Meters, bassist George Porter Jr. and drummer Zigaboo Modeliste, and features a rotating cast of all-star musicians. With the intention of keeping the music of The Meters alive and well, the band is frequently a multi-generational affair, with Porter and Modeliste joining forces with staples of the current live music scene to explore The Meters’ extensive songbook.

With their LOCKN’ set, Foundation Of Funk was celebrating The Meters’ 50th anniversary—with the pioneering New Orleans funk band winning a Grammy Lifetime Achievement Award this year in addition to being nominated (and snubbed) for induction into the Rock & Roll Hall Of Fame for the fourth time. Given that The Meters’ original keyboardist Art Neville rarely plays these days, for this special LOCKN’ performance on August 25th, Foundation Of Funk kept it all in the family, also inviting Art’s brother, Cyril Neville; son, Ian Neville; and nephew, Ivan Neville, along with Ian and Ivan’s Dumpstaphunk bandmate, Tony Hall.

For their set, Foundation Of Funk worked through a number of their classics in addition to standard New Orleans’ fare, with the high-octane set opening with “The Same Old Thing” and moving through “Pocky Way”, “Africa”, “Just Kissed My Baby”, and debatably The Meters’ most famous tune, “Cissy Strut”. From there, Cyril Neville made his first appearance of the set, coming out to lead vocals on “Gossip” and “Under The Weather”, truly solidifying the set’s feel-good, family vibe.

To close out the set, Foundation Of Funk welcomed out their friends from Dead & Company, with Bob Weir, John Mayer, Mickey Hart, and Bill Kreutzmann taking the stage for renditions of “Iko Iko”, “Fire On The Bayou”, and “Ain’t No Use”. The sit-in was not necessarily unexpected, given that The Meters’ legendary bassist, George Porter Jr., is one of the rare few musicians who has previously sat-in with the Grateful Dead-inspired spin-off; during Dead & Company’s make-up New Orleans date in February, Porter joined the ensemble for takes on “Smokestack Lightning”, “Bertha’, and “Sugaree”, though has a long-standing relationship with members from the Grateful Dead.