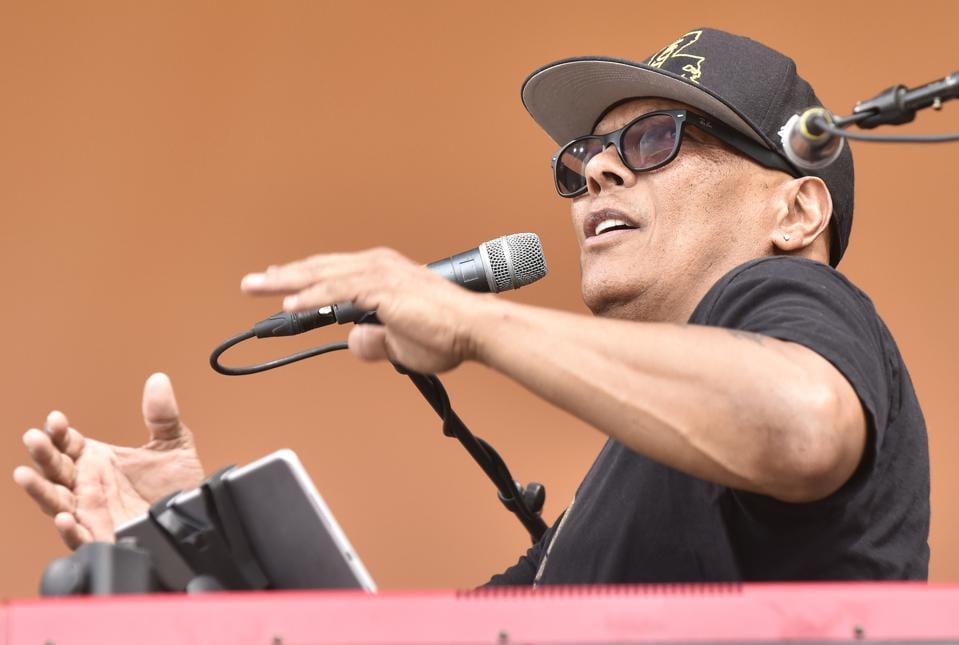 I spoke to New Orleans music icon and member of Dumpstaphunk Ivan Neville a few weeks ago, before the deaths of 13-year-old Adam Toledo and 20-year-old Daunte Wright and before the conviction yesterday of former police officer Derek Chauvin in the murder of George Floyd.

For the 61-year-old Neville, the awful and good of the last few weeks wasn’t going to change the frustration and anger that witnessing more than 60 years of racism in America has brought upon.

“It’s really pretty frustrating to see this s**t keep happening and see racism f**king out there,” Neville says. “It’s a part of who this country is. And it’s unfortunate that people won’t allow themselves to be more educated about this s**t.”

Though the band’s superb new album, Where Do We Go From Here, is chock full of infectious, make you shake your booty funk grooves, the anger and frustration of Neville and his band mates are felt and heard in songs like the title track and “Justice.”

For Neville, the marriage of social messaging and funk grooves comes from some of his musical heroes, such as Sly And The Family Stone and Marvin Gaye. As impassioned as Neville gets talking about the music though, it pales to the fervor of the message he has on racism.

Steve Baltin: Where is the best gumbo in New Orleans?

Ivan Neville: In my house, in my kitchen (laughs). You want to know some spots, some restaurants, there’s a million of them. Straight-up New Orleans-influenced cuisine I would send you to a place called Jacques Imo’s. And then there are a few other places. There are a couple of fusion joints. There’s an Indian joint that’s like an Indian and New Orleans fusion, it’s called Saffron. It’s crushing. Then there’s this seafood place that I love called Peche. It’s got really good oysters and some other things that are delicious. Then you got my friend Shaggy, who’s got a crawfish spot where you can get boiled crawfish and BBQ and there’s even a sandwich over there that we put together. He and I collaborated on the sandwich called the Neville. It’s fried hot sausage, Swiss cheese, onions and pickles and a Sriracha Aioli. And that’s my friend Shaggy, known as the New Orleans seafood and BBQ king.

Baltin: As you’re talking about the gumbo and the sandwich that feels like Dumpstaphunk music, where you just mix it all together in this funky and spicy blend.

Neville: Absolutely, it’s a mixture of a lot of different flavors because we’re marinating in that New Orleans funk. That’s our roots, that’s how we start our dish, with that New Orleans funk. But we got these other influences, the things that we grew up listening to — James Brown, Sly Stone, Parliament-Funkadelic, to name a few. And then you mix that in with our New Orleans funk — the Meters, the sound of New Orleans’ streets, the Mardi Gras Indians, the brass bands — you mix all of that s**t together and that’s what a gumbo is. The gumbo I grew up eating, like you probably have heard of a seafood gumbo or chicken/sausage gumbo. When I was growing up gumbo that my mom and my grandparents made was everything. There was no such thing as just chicken or seafood gumbo, it had everything. That’s the gumbo I think of when I think of Dumpstaphunk.

Baltin: So what are the ingredients in Where Do We Go From Here?

Neville: The album is a mixture of funky grooves with a rock and roll attitude here and there and you hear a little bit of gospel in there as well. You hear a little bit of all of it. And you got some Meters funk mingling with some Bay Area funk, Sly And The Family Stone, and that kind of thing. We did Buddy Miles, who’s also a Bay Area cat. This is like the gumbo both of my grandmothers, maternal and paternal, made. That was everything but the kitchen sink.

Baltin: Talk about the inspiration behind the social messaging on songs like “Justice.”

Neville: A lot of people misunderstand when there’s talk about racism and the different aspects of systemic racism and the things that are connected to it, like white privilege and the prison systems. The way policemen treat African-American’s and now you have this past year with Asian-American’s being singled out, more than likely, because of COVID. It’s been going on for longer than this, but this just sort of highlighted it more and brought more s**t out into the open. That’s what’s been happening, there are a lot of things that have been coming out into the open.

Baltin: Are there songs that inspired you with their messaging?

Neville: Unfortunately there are a lot of songs that come to mind that were written a long time ago that talked about the same s**t. I’m talking about like “Inner City Blues.” by Marvin Gaye; “If There’s A Hell Below, We’re All Going To Go,” by Curtis Mayfield; Sly And The Family Stone, “Stand,” “Everyday People” and I could go on and on. But all these songs, “Mercy, Mercy Me,” by Marvin Gaye, the whole What’s Going On record, it’s so alarming that this stuff was written 50 or more years ago and it means just as much today then as it did then, when it was being created. So creatively and musically, when you’re writing music nowadays, in our situation with Dumpstaphunk, us having been influenced by all of that great music, which is from my favorite era, between 1968 and 1975, ’76, to me that was some of the greatest music of my time. I was heavily influenced by a lot of that stuff and there were a lot of songs about protest, being oppressed, things like that. So when you’re writing songs now and you see the same s**t going on in a different time, and you see people being misused and mistreated because of the way they look, and there were some times growing up I thought maybe things were getting better. There was a time in the late ’70s where maybe I was delusional, but I thought education was improving. I was in a predominantly white Catholic school from first grade to seventh. And when I went to public school, and the schools I went after that, they were in predominately black neighborhoods, there was a drop off in the level of education. When I got to public school I was like, “Damn, I learned this s**t in the fourth or fifth grade.” And here I’m in seventh or eighth grade. That’s just a small picture of the inequalities that exist. If you’re not educating the youth, if we’re not getting educated with equal access to all the resources that are available, you’re talking about a fight that’s not fair. Everybody needs to get a fair shot and that’s not been happening. There was a time where things looked like they were getting better and then Crack came around. Crack was dropped off in all of the neighborhoods. You saw people that were maybe doing well and then all of a sudden a lot of people that I knew, who were decent folks, their lives were shattered because of the f**king Crack epidemic. I’m talking the mid-’80s to early ’90s. I’m a witness to that because I walked down some dark streets in my lifetime in that arena and I saw how devastating some of that s**t could be. When you look at that you see they’re trying to oppress, to limit one’s actions and capabilities. So you fast forward to now, to f**king 2021 and you look at the s**t that’s been going on for the past several years. And people have been getting killed for no apparent reason for quite a while. Obviously there are cell phones and it’s being documented now, where it’s probably been happening a lot more than we know about where there wasn’t the access to cell phones and social media and all that stuff. So seeing this and thinking, “Damn, I thought times were getting better. I forgot that there were people that f**king didn’t like me or hated me because of the way I look.” I remember that when I was a kid. I remember seeing the struggle. I remember watching the marches and Martin Luther King Jr., and watching the people that seemed like they were good leaders get f**king gunned down — Martin, Malcolm X, Kennedy brothers, John and Robert — there was hope and then, bam, kill our leaders. And the last four years obviously it seemed like people got a license to do that a little bit more. Like, “Okay, it’s not so bad. I don’t have to be in the closet anymore about my hatred for this other person.” So all of that stuff, it’s f**king out there. So when you’re writing music, you’re writing funk music you want to make people feel good and you want people to dance, when we come up with grooves it’s naturally gonna make you move, it’s gonna make you feel something. But if you have an opportunity to say something, maybe in a subtle way — we don’t want to preach or bum you out, ruin your day by reminding you of the grim circumstances that we face. But here’s a little reminder. While you’re shaking your ass , shaking your booty, “Here’s something to think about too.” And that’s what happens in the creative process. You find you have a chance to say something, so why not say it?