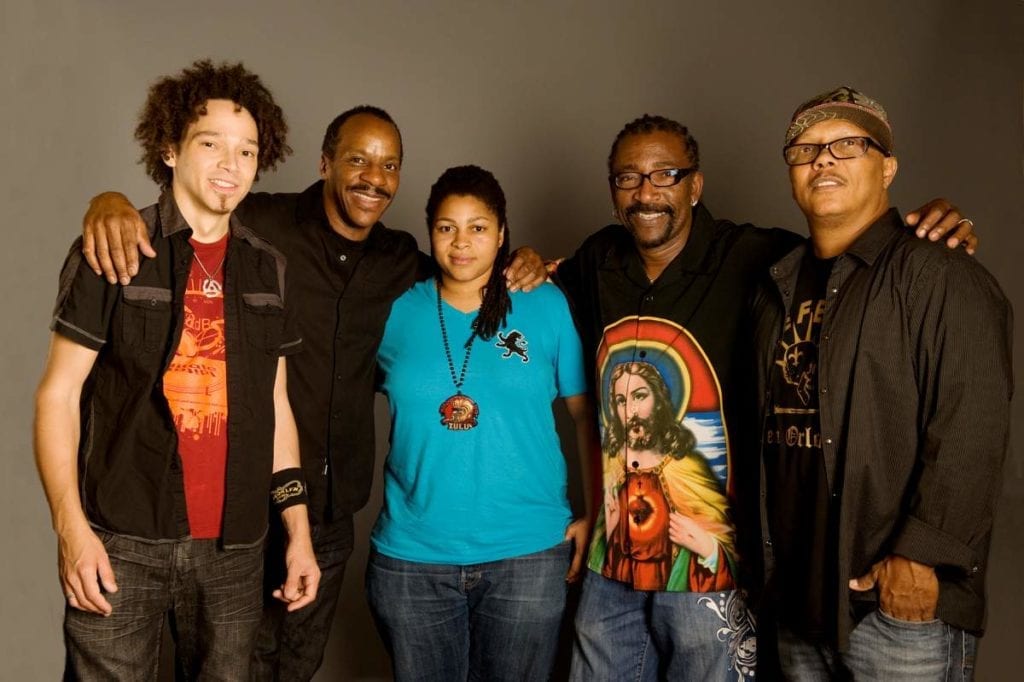 Ten years ago, Ivan Neville put his solo career in the dumpsta. As a solo artist during the ‘80s and ‘90s, he’s found a mix of deep grooves and confessional songwriting.  But as the leader of Dumpstaphunk he put the groove upfront, and has been on that track ever since.

Dumpstaphunk celebrates its 10th anniversary this month, having seen only one personnel change in that time, when Nikki Glaspie replaced Raymond Weber on drums. Ian Neville is still on guitar, and the instrumental trademark remains the twin basses of Nick Daniels and Tony Hall. “When I was looking for people I was thinking, ‘You know what, these guys both play their asses off and they both can sing. I’m gonna call both of them’,” Neville says. “It wasn’t like I was intending to start a band, more like a slot opened up at the Jazz Fest in 2003 and I called some friends up. After Katrina, it took a little more of my time—There was a lot of light shining on New Orleans then, so a lot of opportunities came that might not have happened otherwise. Playing Bonnaroo in ’06 was another big boost, and High Sierra afterwards, and it was definitely a fulltime band by then. I like to play in spaces, and I like to listen to what the other guys are doing. The thing about two basses is that it makes me play different things with my left hand.”

The band’s new disc Dirty Word—a limited release for Jazz Fest and a full release in June—will see them branching out a bit. “We got the straight up funk stuff and one song that’s got a little pop sensibility. We got one that has a melody that maybe lends itself to some older Ivan Neville stuff. And we got a second line brass-band song that’s kind of killer. We got Rebirth and Trombone Shorty on that.” As for the title, “We were thinking that funk could be a dirty word, especially when it’s in the name of your band. It’s something best left to the imagination.”

The group has a bunch of shows scheduled around Jazz Fest, including “D-Phunk Does P-Funk” on Friday 26 at Howlin’ Wolf—yes, a full set of George Clinton material (Neville promises to buy some suitable costumes for that). They play the Fairgrounds on Saturday 27 and hit the Maison that night, then play Instruments A-Comin’ at Tipitina’s Monday. Finally they’ll will have an anniversary show at Tipitina’s on closing Sunday.